Circumcision conflicts with children’s rights and doctors’ oath and can have serious long-term consequences, state an international group of 38 physicians from 16 European countries in Pediatrics today. They comment on the American Academy of Pediatrics’ new policy on infant male circumcision.

There are no compelling health arguments in favor of circumcision, while it can have serious long-term urological, psychological and sexual consequences. And performing medically unwarranted circumcision of underage boys conflicts with good medical practice. Male infant circumcision conflicts with children’s rights and the doctors’ oath not to do harm.

The American Academy of Pediatrics recently released its new Technical Report and Policy Statement on male circumcision, concluding that current evidence indicates that the health benefits of newborn male circumcision outweigh the risks. The technical report is based on the scrutiny of a large number of complex scientific articles. Therefore, while striving for objectivity, the conclusions drawn by the 8 task force members reflect what these individual physicians perceived as trustworthy evidence.

Seen from the outside, cultural bias reflecting the normality of non-therapeutic male circumcision in the United States seems obvious, and the report’s conclusions are different from those reached by physicians in other parts of the Western world, including Europe, Canada, and Australia. In this commentary, a different view is presented by non–US-based physicians and representatives of general medical associations and societies for pediatrics, pediatric surgery, and pediatric urology in Northern Europe.

To these authors, only 1 of the arguments put forward by the American Academy of Pediatrics has some theoretical relevance in relation to infant male circumcision; namely, the possible protection against urinary tract infections in infant boys, which can easily be treated with antibiotics without tissue loss. The other claimed health benefits, including protection against HIV/AIDS, genital herpes, genital warts, and penile cancer, are questionable, weak, and likely to have little public health relevance in a Western context, and they do not represent compelling reasons for surgery before boys are old enough to decide for themselves. 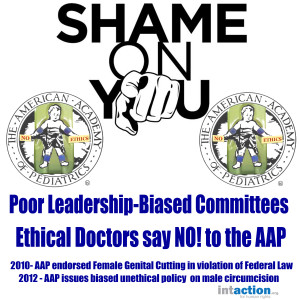