Most medical associations worldwide are opposed to the circumcision of babies.

Circumcision has been promoted with false medical claims

Throughout the ages, advocates of circumcision have attempted to find diseases to be cured with circumcision in order to justify the procedure. Circumcision has been touted in Victorian era America as a cure for epilepsy, bed-wetting, nervous disorders, and “precocious sexual unrest.”

Advocates of circumcision attempt to link the foreskin to the spread of the HPV (Genital warts) papilloma virus. However, studies have provided conflicting results in the quest to prove that circumcision is an effective prophylactic means of preventing HPV. HPV can be spread through any skin to skin contact, not only the foreskin. HPV warts can appear on many areas of the body. There is a very effective HPV vaccine (Guardasil) available for males and females with a 99%+ efficacy rate that renders the circumcision argument moot.

Circumcision does not prevent transmission of the HIV. Advocates of circumcision have touted flawed studies in third world African counties that seemed to show limited protection (for men only) against HIV infection. However, most men of sexually active age in the United States are already circumcised, but the HIV infection rates are higher in the USA than in other developed countries where circumcision is rare. African clinical trials commonly mentioned in the media fail to mention the flaws contained in those studies.

Recently, a 2010 study conducted by the Centers for Disease Control (CDC) proved what we knew all along, that circumcised men have the same HIV infection rate as intact men in the USA.

Circumcision has significant harms and risks

Babies undergo severe pain and stress both during and after circumcision. Local anesthetic (if given) are only partially effective.

Risks include accidental amputation, excessive bleeding, infection, Peyronie’s disease (curvature), excessive skin removal, loss of sensation, and permanent lifetime disfigurement. These are called “botch jobs.” In the U.S., over 100 infants per year die from complications of circumcision, as per a 2010 journal study. Doctors and hospitals are being challenged with malpractice claims now more than ever.

Proof of these injuries and deaths are easily found by just opening the newspaper. In 2010, a N.Y. baby died in Beth Israel hospitaldue to complications from circumcision. These outcomes are entirely preventable by not performing circumcisions.

Some doctors continue to use the “MOGEN” style circumcision instrument.

The U.S. Food and Drug Administration has issued warnings about the Mogen. “We are concerned that some serious device-related complications have occurred. We received 105 reports of injuries involving circumcision clamps between July 1996 and January 2000. These have included laceration, hemorrhage, penile amputation, and urethral damage,” the FDA has stated. While an 139 additional injury reports have been reported, the FDA has not yet recalled the Mogen instruments from hospitals.

Most of the world is healthy and happily intact 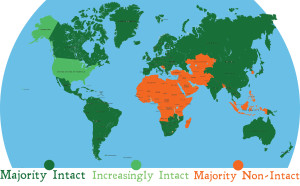 Throughout most of the world, being intact is normal and natural.Over 80% of newborn babies are left intact. In fact many countries have severely restricted the practice unless a dire medical emergency exists. Now more than ever, American babies are being left intact. According to the CDC, almost half of American newborns are intact, and that rate is increasing with each year.

Foreskin is the most densely nerve-laden part of the penis, containing 240 feet of nerves and 20,000 nerve endings. It comprises over 15 square inches of skin in the adult male.

The foreskin contains dense concentrations of Meissner’s corpuscles, which are special nerve endings especially sensitive to light touch. These highly specialized nerve sensors are one reason why genital cutting is so painful to an infant. The foreskin also contains Langerhan’s cells, which act as sentries to alert the immune system to invading bacteria and viruses.

As a protective cover, the foreskin acts in the same way the eyelid functions. It keeps a sensitive area covered, but retracts as necessary.

Scientific research is always making new discoveries. It would be arrogant for doctors to assume the foreskin is an unnecessary “flap of skin.

An infant cannot give consent for the procedure. He (or she) has the inalienable right to choose for himself, as a consenting adult of 18 years or older, of self-determination over the status of his (or her) sexual organs.

Females are protected from genital mutilation by U.S. Title 18 Part I Chapter 7 Section 116 of September 30, 1996, therefore males should be granted equal protection under the law as per the 14th Amendment.

Under current law, hospitals are automatically given ownership of harvested infant foreskin tissue. Neonatal tissue has unique stem cells and growth factors which are valuable. Some hospitals may sell infant foreskin tissue to bio-tech and cosmetic companies for further profit. In an era of reduced insurance payments to hospitals, there is more pressure than ever to increase revenues.