Circumcision In the Bible or the Street – The Fight Over Foreskin

The movement against circumcision is gaining more visibility in the U.S. Some young men particularly questioning the practice as a method of overbearing societal control and unnecessary trauma. And overseas, in Norway, the push to officially ban circumcision has resulted in a controversy involving allegations of anti-semitism. With circumcision being in the Bible, the practice  has held people in it’s trance for thousands of years. 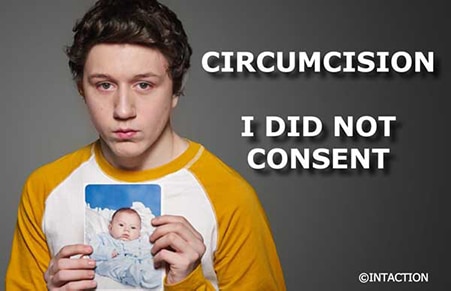 Intaction’s I Did Not Consent Brochure

“IDIDNOTCONSENT.ORG” is the website from a group called Intaction that has been positioning its rather expensive looking truck at prominent locations in Manhattan. The group calls the truck a “mobile education unit.” Staffers hand out brochures and answer questions from a steady parade of men. Some who stop to ask questions are sheepish. Others want to know what they’ve been missing. A few furrow their brow and seem close to throwing up.

The “I Did Not Consent” folks are rather blunt about their message. Their literature contains photos of stern looking guys holding pictures of themselves as babies with statements such as:

Amputation of the foreskin is painful & traumatic for babies. I was tied down in an infant restraint. I was given little anesthesia while a doctor crushed my infant foreskin with a cruel medical device. After ten agonizing minutes, he cut me…I cried out. I DID NOT CONSENT

Foreskin Has Advantages, and Circumcision has a Bizarre History.

Medicalization of Infant Circumcision in America

Circumcision in the Bible helped to bolster the popularity of the practice with certain peoples. The Abrahamic religions of  Judaism and Islam adopted the practice with fevor. Widespread circumcision in the U.S. is a product of alleged medical benefits that claimed it was a way to prevent infection and disease. Many Americans don’t necessarily think of it as a Jewish custom.

For the record, the American Academy of Pediatrics says the medical benefits of routine infant circumcision outweigh the risks. They go on to say the benefits are not significant enough to recommend routine circumcision of all newborns. This guidance stands in contrast to guidelines in other English-speaking countries such as Australia, Britain and Canada. They say circumcision is not medically necessary.

Despite Circumcision in the Bible, Europeans Try to Avoid Controversy

The cartoon, published Tuesday in Dagbladet, depicts a disheveled man talking to Jewish and Muslim protesters holding signs reading, “Yes to circumcision” and “Freedom of religion.” The man responds, “I understand exactly how it is with you! I also get messages from invisible men in the sky to play around with small kids’ penises!”

Some Norwegians were offended by what they saw as a clear anti-Semitic message. The cartoon came after the Libertarian Progress Party voted to prohibit circumcision. The party, which also strongly opposes immigration, is the third-largest in Norway. It is currently in a coalition with the Norwegian Prime Minister’s Conservative party.

Despite the references to circumcision in the Bible, many feel that if God wanted men to be sans foreskin, he wouldn’t have put it there. To that point, a recent Heat Street documentary told the story of the growing number of men who are trying to restore their foreskin. Many of them want to feel whole again. Among younger men in the U.S. the entire topic is not as taboo as it once was.

There are no official numbers, but online forums and sales figures from device makers suggest there are tens of thousands of men currently “restoring.” The largest online community, RestoringForeskin.org, has more than 16,000 members. And Ron Low, maker of a restoration device called the TLC Tugger, says his business has grown steadily over the past decade, with around 5,000 new customers each year.

Restorers believe the foreskin is not just a useless flap—they argue it protects the head of the penis and makes for better sex. They use a range of devices—typically they involve gradually stretching with weights and straps—and their hands to gently tug on the remaining foreskin. This sustained tension over time creates extra tissue. And although it doesn’t have the specialized nerves and physiological functions of an actual foreskin, restorers say it makes a big difference in the bedroom.

Some men are using restorative products that are designed to help circumcised men’s skin become more sensitive. These skin care products help to overcome the negative effects caused by circumcision. Those using it clams that it helps them feel more in the bedroom and it makes sex more satisfying. One such product is AlphaArmor. Alpha Armor claims to make men’s skin more sensitive for better, more intense sex. If circumcision in the Bible was engineered to diminish sexual pleasure as some claim, products like AlphaArmor just might be one way to reverse that pleasure grab.