Clayton County, GA. The efforts of veteran attorney Jonathan Johnson are, at the moment, heavily focused on a medical malpractice case that will have long lasting consequences for a three-year-old boy who will be growing up with a mutilated penis after a circumcision went very wrong. 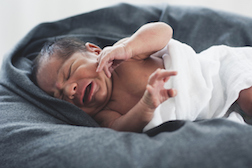 His mother has already incurred thousands of dollars in medical bills and there will be many, many medical appointments for her son in the future.

On October 21, 2013, baby DeJuan Williams’ mother brought him to a medical clinic in Clayton County, Georgia where he was scheduled to be circumcised by a nurse midwife.

“The child went in for a circumcision with a nurse midwife in Clinton County when he was three weeks old,” says attorney Jonathan Johnson from the Jonathan Johnson Attorneys at Law in Atlanta, Georgia. “The nurse midwife accidentally severed a portion of his penis. It is the end of the penis called the glans.”

Glans is Latin for the word acorn and refers to the shape of the hyper sensitive tip of the male penis.

According to the statement of claim, the midwife nurse at the Life Cycle OB/GYN clinic laid baby Williams on his back on a table, draped and prepped his genital area. She then used a medical device called a Mogen Clamp to do the procedure. 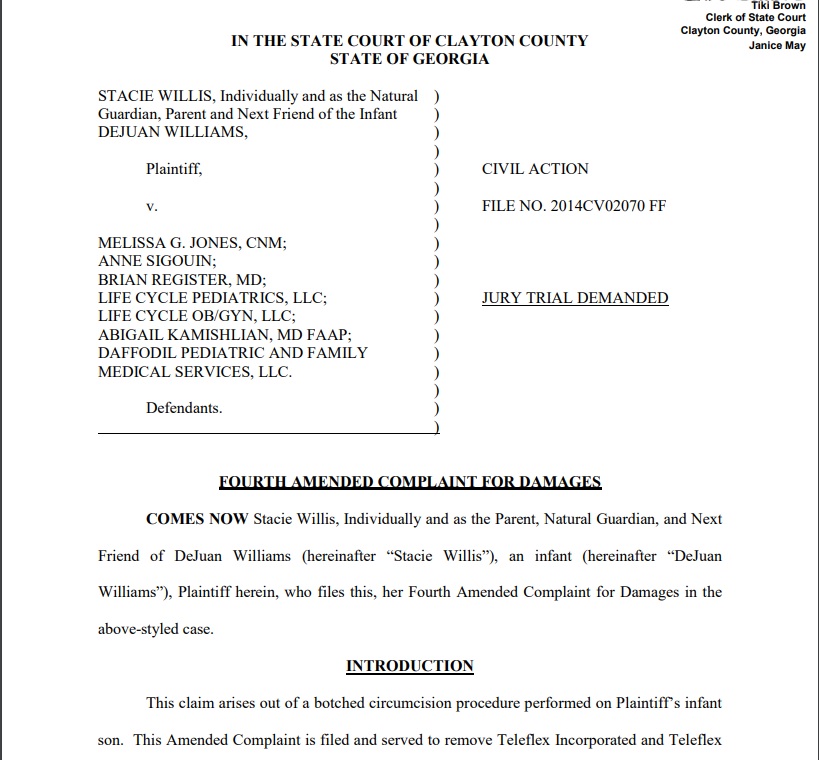 In the process, the complaint says, the midwife “amputated the glans of DeJuan Williams’ penis by placing and using the Mogen Clamp in an attempt to perform a circumcision on the infant.”

A doctor at the clinic and another nurse midwife were called in and observed the injury. According to court documents they permitted Stacie Willis and her baby to leave the clinic without sending the baby for an immediate consultation with a pediatric urologist along with the severed portion of the penis.

When the lacerated area continued to bleed later that day Stacie Willis took her baby to a hospital emergency room.

“The mother was not told what occurred,” says Johnson. “When she took him to the emergency room they could not visualize the injury. It was actually sometime later when she found out how serious the injury was,” says Johnson.

“The weird thing about the case is that the doctors that cut off the tissue put it a saline solution and put it in the freezer. They never advised the mother or anyone else that they had this tissue available. It possibly could have been re-attached to the child if it had been done properly,” says Johnson.

“The mother never knew they had it,” says Johnson. “We later found out they had it in their refrigerator for several months.”

The case is now in the important examination for discovery phase and will be followed by the certification of expert witnesses.

The named defendants include the nurse midwife, several doctors and the medical clinic. The suit also names Teleflex, the manufacturers and sellers of the Mogen Clamp. According to the statement of claim Teleflex had “a duty to recall the Mogen Clamp because they knew, or reasonably should have known, that it was a defective and unreasonably dangerous medical device not suitable for the intended purpose and use, with the propensity to cause severe and permanent mutilating injury to infants, including amputation of their penis glans.”

It is unlikely that DeJuan Williams will have a normal function of penis now or at any time in the future.

The suit claims Teleflex was reckless and failed to warn that its Mogen Clamp could cause serious debilitating injury. The suit demands in punitive damages $100 million from Teleflex.

“It really cannot be corrected,” says Johnson. “There is no way to correct it at this this point.”

A Clayton County jury on Friday awarded a boy about $31 million for a botched circumcision, a spokeswoman for his family’s law firm said.

It isn’t yet clear which of the defendants will have to pay and how much because records weren’t immediately available. The child’s mother, Stacie Willis, didn’t want to comment.
Intaction2020-08-07T09:56:53-04:00