The Lesser Known Complication Of Circumcision | A Parent’s Regret

Hospitals are quiet at 6 a.m. Nurses are arriving for shift change, carrying giant insulated mugs full of caffeine, trying to look awake. The smell of coffee and scrambled eggs comes from the cafeteria; the smell of disinfectant from everywhere else. I’m in a hospital. It’s a big day. My son is being circumcised. He’s 17.My alarm was set for five but I woke up at 4:57. I think a mother learns early on to wake up before her children — especially one about to have surgery. We live five minutes from the hospital in our small town, getting “ready” for me involves putting on pants — and that’s about it. I wanted time to make toast, so I could pop the meds that have to be taken “at mealtime,” so I set the alarm I didn’t even use for 5 a.m. to eat toast I don’t even want. Who would even want toast before their child is taken from their sight into a room they’ve never seen? Even if they are 17. Even 17-year-olds are still babies. Circumcision. That’s how I came to be in this hospital, sitting next to my 21-year-old daughter, across from my ex-husband and his new wife, drinking coffee, typing this article as some bizarre writer’s coping mechanism.

You’re probably wondering why a 17-year-old would be circumcised.

It starts in the year 1998 when my first son (who is now 19 and living in his own apartment being an adult) was born. In the year 1998, circumcision was the thing you did. At least in America, it was a thing you did. At least with good insurance, in a big city, with a fancy pediatrician who had the latest studies that somehow proved that circumcision reduced your risk of cancer and STDs and the risk of people thinking your penis looked weird, you circumcised your babies. I was 23 then. I was a smart 23-year-old with a circumcised husband and a circumcised father who told me I’d better not “let my sons go through life wearing a turtleneck.” Which is I guess how he describes penises with foreskin. It wasn’t that I wanted to circumcise my kids.

I cried from outside the room they wouldn’t let me in. It’s just that’s what we did then. This was when people were still saying, “Don’t you want him to look like his dad?” I don’t really care. My youngest son isn’t circumcised, and I don’t care if he “looks like his dad.” I do care that he has a choice about what to do with his own body. I do care about inflicting unnecessary pain on him. I also recognize that other people feel differently. I recognize that we are all doing our best. In the year 2000, I was doing my best. I had my son circumcised. The circumcision were explained to me as “low.” Including:

These possibilities were presented as “unusual.” Risk not mentioned above by WebMD, or by my physician? Adhesions. Adhesions are, in essence, scar tissue. When a body is injured, as in the case of skin being removed, it tries to heal itself. This is the literal job of the body; you can’t really blame the body for doing its job. Owen’s body did its job. It healed the circumcision the doctor gave him when he was just a few days old. It did so very quickly. I noticed the beginning of the scar tissue forming not long after. On a newborn penis, scar tissue happens fast. The pediatrician wasn’t worried. When you change his diaper, just “separate the skin by pulling,” he said. Then apply ointment to your hysterical infant. He didn’t say that last part, but that’s what happened. Eventually, despite my pulling, it healed itself, as wounds do, and our pediatrician told us not to worry. “When he starts getting regular erections and having sex, it’ll fix itself.”

It did not fix itself

That’s why I’m here, in this hospital. That’s why I’m drinking coffee next to my 21-year-old daughter, across from my ex-husband and his new wife, typing this article and worrying about my baby boy that isn’t a baby anymore. We’ve checked in over the years, me asking how it’s doing, is it correcting itself as the doctor said it would, him saying, “No, it’s not.” It was a few months ago that I asked him if it was causing him pain. “Yes, it is.” Did he want it “fixed.” Yes, he did. There really isn’t a way you can leave something like this “unfixed,” not with pain. Owen is the youngest of what I call my “big kids.” The baby. There are ten long years between him and Ella, which means for ten years he got to be my baby boy. Despite being 17 — driving a car, dating a girl, getting ready to go to college — he is still my baby. His dad used to say I was too soft with him, I let him manipulate me with his tears. He used to say it was obvious that Owen was my favorite. 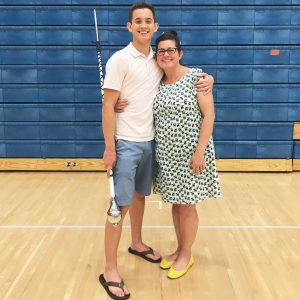 I don’t pick favorites among my kids, but he sure has my heart, this kid. He’s the kid that asks me everything — once upon a time, about the sun and when it will burn out, now, about sex, about how to pay taxes, how you get a mortgage, about how you know who you should marry. He’s the one who sits with me on my bed late at night, after the little kids have gone to bed, and laughs and talks about people and politics.

And today he is being circumcised. Again.

Being re-circumcised is not the same thing as the quick in-office procedure that happens to a newborn. It’s a surgery now. It requires the don’t-eat-after-midnight kind of general anesthesia, IVs, antibiotics, bedrest. Two weeks. No straining. You don’t want to disrupt the stitches, or you might end up with another adhesion. Another surgery. It’s not the same for a mom either. Instead of sitting outside a doctor’s office examination room with my postpartum tears, I’m sitting in a hospital, crying after seeing my son stuck four times — three in the right arm, one in the left — to place an IV in his stubborn veins. Instead of taking my newborn baby into my arms to nurse him, I’ll be driving him home, stopping at the pharmacy on the way to pick up his pain meds. I’ll be delivering food to his bed. I’ll be explaining to him how to take care of his newly re-cut penis.

He’ll be applying ointment every day for two weeks. He’ll be lying flat, with all the parts and pieces that are most important to a teenage boy surrounded by gauze, covered in antibiotic cream. He’ll be in pain, for several weeks, which might as well be forever when you’re 17 and you’ve never had anything more than a broken pinky finger.

And I will regret that I ever decided to circumcise him in the first place. I will wish I could undo that decision and give him back today, and the summer he’ll spend in bed. I guess the risk of bleeding, pain, irritation, inflammation, and injury wasn’t enough to make me question the decision to circumcise my boys. But the risk of having to sit in a hospital while my teenage son is alone in an OR, undergoing a surgery he never would have needed had I left his penis alone, would have been.

*This story has been told with his permission and desire to make folks aware of something rarely discussed.