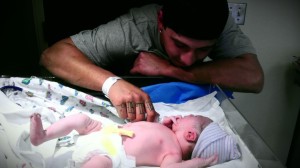 Brayden Tyler Frazier died last week after circumcision may have placed him in a fight for his life, a fight he was unable to win.  Family members posted on Facebook the baby started bleeding uncontrollably after being circumcised. On March 6, the baby was transferred from a community hospital to the UC Davis Medical Center Neonatal Intensive Care Unit in Sacramento. According to a family friend, doctors attempted to use coagulants, platelets, and plasma to save his life after the baby was diagnosed with hemophilia.

The baby then started having uncontrollable seizures along with failure of his liver and kidneys. Doctors advised the family that they were not optimistic about his survival. All efforts to save the baby’s life were unsuccessful, and he succumbed to his wounds at 11 days old. 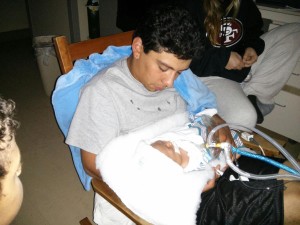 Circumcision is a painful, risky and harmful cosmetic surgery. Some experts assert doctors have become complacent in ignoring these risks leading to complications and death. In response to this story the the American Academy of Pediatrics has stated that infants with hemophilia should not be circumcised, and in these cases the risks outweigh any potential benefits. AAP representatives stated that babies are not routinely tested for clotting disorders prior to circumcision, making it impossible to know which babies are at risk.

Some medical experts scoff at studies claiming that a significant number of babies die after being circumcised. Doctors tend to attribute circumcision deaths to other causes. Grief-stricken parents may be unable to handle the guilt in that their decision to circumcise their child caused harm. Another possible motive for doctors to misreport cause of death would be to defend against medical malpractice lawsuits. Under-reporting infant deaths after circumcision may lead some to believe these incidents never happen.

The family stated through UC Davis spokesperson Phyllis Brown they believe the cause of death was not from circumcision, but refused to release further information. The hospital further stated, “The baby received the highest level of care, and we are deeply sorry for the family’s loss.”

The family also published this statement: “Our little guardian angel, Brayden Tyler Frazier, born February 25, 2013 entered into heaven on March 8, 2013. He is loved by his parents Ashley Arms and Krystian Frazier. He is also loved by grandparents Chris Arms, Will and Vera Haena, Maggie and Al Barner and Darin Frazier. As well as many loving great grandparents, aunts, uncles and cousins. We’ll forget you never, the child we had but never had and yet will have forever.” Published in Lodi News-Sentinel from March 13 to March 20, 2013