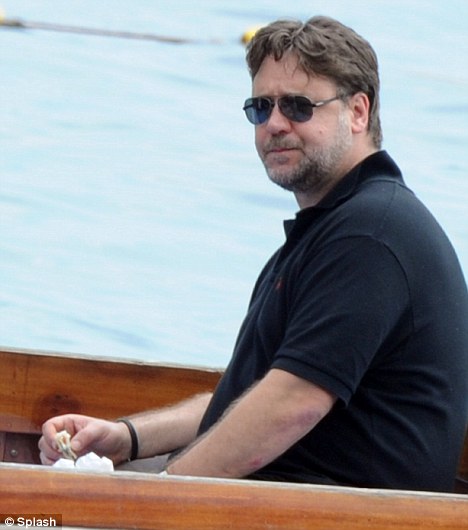 Russell Crowe caused a Twitter row this morning when he declared circumcision was ‘barbaric and stupid’.
The antipodean actor, 47, risked the wrath of the Jewish and Muslim communities when he declared the practice of removing some or all of a male’s foreskin as ‘immoral’.
The Oscar winner, who is currently on holiday in Italy, staunchly defended his viewpoint as he was bombarded with both criticism and praise by his followers.
It started with a simple question from a pregnant follower, who asked Crowe if he thought she should have her unborn baby boy circumcised. However, when follower ‘Picknic11’ said: ‘Do you think I should get him circumstanced?’, he replied: ‘Here’s a life rule, if you can’t spell it, don’t do it.’
The actor, who has two sons Charlie, seven, and Tennyson, four, with wife Danielle Spencer, believes babies are ‘perfect’ and should not be tampered with.
He said: ‘Circumcision is barbaric and stupid. Who are you to correct nature? Is it real that GOD requires a donation of foreskin? Babies are perfect.’
When one Twitter user ‘Hodanismail’ claimed ‘there’s actually a scientific reason for it’, Crowe answered: ‘My friend, “human” science has caused too much damage, don’t be a moron.’
Things took a stronger tone when another user ‘BarackMcBush’ insisted ‘It’s more hygienic and nobody remembers it’.
The Tweet then prompted Crowe to blast: ‘Hygienic? Why don’t you sew up your ass then?’
When another user ‘TAHIRcomedian’ insisted ‘a matter of cleanliness’ was a reason for circumcision, Crowe replied: ‘They are also by and large immoral, so F it, cut it all off at birth (I expect a royalty when I hear you do this as a routine).’
A follower named ‘Lolis02’ then brought up the religious reasons for circumcision – referring to the bris ceremony, when a newborn Jewish boy undergoes the procedure.
After Crowe retweeted two followers comparing circumcision to sexual mutilation, she said: ‘Honestly you are comparing sexual mutilation with a Jewish ceremonial act?!’
He said: ‘Can you actually read the words you just typed “a ceremonial act”? F**K that. The Mayans had ceremonial acts too.’
Crowe insisted he didn’t mean to offend any religions and insisted he had many close friends who were Jewish, including director Eli Roth, who he is currently working on a film with.
He explained: ‘Many Jewish friends, I love my Jewish friends, I love the apples and the honey and the funny little hats but stop cutting your babies @eliroth.’
When a user tried to whip up further controversy by claiming the newspapers would claim ‘Russell Crowe against Jews’, he hit back: ‘You should delete that tweet because it makes you look like an idiot.
‘We can get by without little fingers and toes too, we can can still be fully human missing limbs.’
When a follower said her fiancé wished he had been circumcised as a young boy, Crowe continued: ‘Same as tattoos/plastic surgery; he is an adult and he “wants” it, then off you go, mothers were right to keep their babies intact.’
He finally attempted to finish the row by reiterating his views: ‘I will always stand for the perfection of babies, I will always believe in God, not man’s interpretation of what God requires.
‘Last of it, if you feel it is your right to cut things off your babies please unfollow and f**k off, I’ll take attentive parenting over barbarism.’
Read more: http://www.dailymail.co.uk/tvshowbiz/article-2001929/Russell-Crowe-launches-circumcision-Twitter-row.html#ixzz1OtsNfuhk