Skip to content
Home » Intaction’s Circumcision News » MEL Magazine: Why Foreskin Activists Are Taking to the Streets
Previous Next

MEL Magazine: Why Foreskin Activists Are Taking to the Streets

Why Foreskin Activists Are Taking to the Streets.

At the anti-circumcision trucks in NYC, come for the sex and stay for the graphic snip videos

Passersby in Manhattan’s Union Square are no strangers to public stunts. They’ve got high-flying skateboarders, activists, rallies and protests — and this week, a giant truck featuring a half-naked woman ripping the tighty-whities off a helpless dude. At the top are the words “foreskin… a girl can hope.” To the right, there’s a big ad sending onlookers to a site called foreskin.life, which promises a list called “4 Powers of Foreskin” and shows the intertwined legs of a couple in bed. 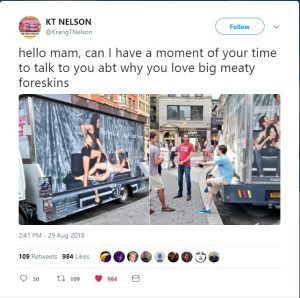 The group behind the truck is an anti-circumcision group called Intaction — like the words “intact” and “action.” Led by Anthony Losquadro, they’ve dedicated their time to fighting, or at least starting a conversation around, infant circumcision.

“Ninety-nine percent of European men are intact, and right now in America, the rates are closer to 50/50,” Losquadro says. “Thankfully the rate is beginning to decline, and our job is to drive that down to be as low as the European rates.” Though circumcision is a polarizing subject (you can read our extensive guide to it here), Losquadro claims he’s only there to educate the masses. That’s where the truck comes in.

After Intaction lures you in with the sexy stuff, they want you to watch graphic videos of babies getting snipped. “In addition to the main billboards, our mobile unit has exhibits such as the Infant Genital Cutting Exhibit, where people see what’s done to a baby in a hospital. It’s what the doctor won’t show you goes on behind closed doors — and that’s one of our most popular exhibits.” 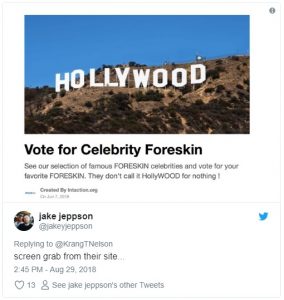 After you’ve peeked behind the doctor’s curtain, head over to the truck’s historical exhibit: “Completely Bizarre History of American Circumcision.” Losquadro tells me all about circumcision’s history as a 19th-century anti-masturbatory procedure. My own research finds that John Harvey Kellogg, the cereal guy who was also a doctor, prescribed circumcision without anesthesia as a punishment for self-abuse.

As circumcision rates have fallen in the U.S. and intactivists spread their message further, foreskin-rights groups have been the subject of criticism — particularly for a broad insistence on calling circumcision “genital mutilation” and equating it with the more sadistic practice of female genital mutilation, or FGM. According to a joint statement from the U.N. and the World Health Organization, FGM is a human rights violation with no medical benefits. “Painful and traumatic,” it “interferes with the natural functioning of the body and causes several immediate and long-term health consequences.”

Still, the intactivist scene continues to gain steam online. Some men try their hand at underwear that simulates foreskin, and some are on a quest to regrow their foreskins by hanging weights from their glans — take it from Wayne Griffiths, the “father of foreskin regeneration.” But according to Intaction, that’s not what their mission is about, nor are they trying to get to Capitol Hill. “We’re just conducting advocacy and educating,” Losquadro says.

Going on four years of public activism, the intactivists aren’t leaving Manhattan anytime soon — or at least until American circumcision rates match Europe’s. “We’re in Union Square every month, sometimes twice a month, until the winter weather shuts us down,” Losquadro says, adding that New York City’s size and diversity give them something like a perpetual focus group.

And so, the debate rages on in Union Square, in doctor’s offices and online. Intactivists like Losquadro say they’re just trying to tell their side of the story (though some activists have shown to be a bit more aggressive than that), while urologists and health organizations urge each individual to weigh their options and know the benefits.

In other words, it’s the classic example of an issue that cuts both ways.

Quinn Myers is a writer based in Chicago.