Atlanta, GA, May 29, 2015 –The Law Firm of Jonathan W. Johnson, LLC filed a lawsuit on September 25, 2014  in  Clayton  County  State  Court  on  behalf  of  their  client,  Stacie  Willis,  as parent  of  her  infant  son,  DeJuan  Williams,  who  had  the  end  of  his  penis amputated during a botched  circumcision. Ms. Willis had taken her son to Life Cycle OB/GYN and Pediatrics in Riverdale, Georgia for a routine circumcision in October  2013.  Nurse  Midwife  Melissa  Jones  performed the  procedure  with  a Mogen clamp. Most nurse midwives do not perform circumcisions.

On May 20, 2015, Judge Aaron B. Mason granted the Plaintiff’s motion to add as defendants,Teleflex Incorporated and Telefl​ex Medical Incorporated, the alleged manufacturer of the Mogen clamp used during the procedure.  Mogen ​clamps  have  been  found  to  be  defective  products  whi​ch  cause  circumcision injuries to infants in other cases.

The  infant  has  undergone  several  corrective  surgeries  and  it  is  expected that  his future medical needs and expenses will exceed  $1,000,000.00. 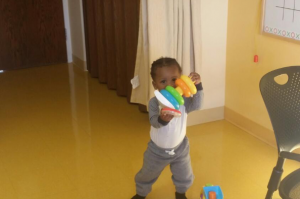 It all started on Oct 21, 2013 about 2 1/2 weeks after my baby boy (Dejuan) was born. During a time when I should have enjoyed being a mother, my nightmare began!  On Oct 21, 2013,  my son went in to Lifecycle OBGYN to get circumcised.  During this time, I  could hear my son screaming and hollering like he was in tremendous pain. I quickly ran to his side too see what the problem was.

I witnessed the glans of  my son’s penis gone.   The tip of his glands and urethra were severed. I repeatedly asked  the midwife what was going on and why was my son bleeding profusely from his penis.  She told me everything was okay and my baby would be fine.

I was scared and confused on what was happening, because I knew something was not right.

As a mother I got a second opinion,   I arrived at the hospital and had my son checked out, and  my suspicion  was right.  I knew the way his penis was bleeding was not right or normal. I have to other boys, (both have been circumcised) and never experienced this.

Due to this incident, it has caused my son to have  corrective surgery on his penis for the rest of his life. Dejuan has already had two surgeries  to reopen his pee hole to correct the problem, and he is only one year old. The fact that my son will never live a normal life is devastating and my son’s penis will never be normal no matter how many surgeries he has to have.

My son will never have a sensation feeling at the head of his penis and may never be able to have children due to his damaged nerves from this horrific accident. My son has already started to develop issues due to this horrific incident . 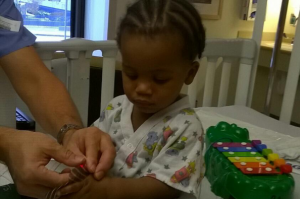 As a parent, it’s very hard to see your child face and live with the difficulties and magnitude of his situation. This pains me, and is very depressing and heart breaking to see my son go through all of this pain and suffering possibly for the rest of his life.

At a very young age my son Wille (will) start seeing a therapist to start helping him understand what he is going through and what he will be dealing with for the rest of his life. My son has had to have his man made pee hole stitched shut because the hole decreased tremendously  causing him pain while trying to urinate  as well as getting his  urethra re-opened, because of his urine stream decreased.

For the most part my son is a very happy and playful little boy.  My son will have his third surgery on May 22, 2015 at the Discovery Clinic at The University of Minnesota.

It is not known how many surgeries he will need over his lifetime, and each surgery is expensive. Dejuan is currently without any insurance coverage for Minnesota, and his medical needs have far exceeded what our family will be able to handle over a long period of time.