An anti-circumcision advocacy group is on the streets of New York City to wake Americans to stop cutting babies’ penises.

Intaction – a play on the words intact and action – aims to convince American men, women, and doctors that neonatal circumcision is a violation of human rights. That’s the name of this anti circumcision advocacy group in New York City.

The non-profit organization was first started in 2010. Their mission statement, according to the Inaction website, is “that every individual has the inalienable right to an intact body. Only an adult of majority age, with fully informed consent, can agree to needless and permanent body modification.”

Circumcision, or the removing of the foreskin from the penis, is one of the most common surgeries in America, according to the World Health Organization. The WHO estimates the circumcision rate is somewhere around 76% of adult men. (The infant rate is now about 50% – editor).

In America, there are various explanations cited in favor for the procedure, including health and hygiene reasons and as part of cultural and religious traditions.

According to the Centre for Disease Control (CDC), circumcised males are less likely to contract HIV, herpes, and human papillomavirus (HPV) from sex. Circumcision has also been linked to lower risks of certain cancers. However these claims are disputed by other medical experts, especially from medical societies outside of America. They say the evidence the CDC relies on is inconclusive. For instance in intact/uncircumcised European males, they have lower rates of the aforementioned STD’s and cancers.

Intaction views the “abhorrent” practice of male circumcision as comparable to female genital mutilation (FGM). FGM is illegal in the United States, and exists for the sole purpose of controlling female sexuality. This anti circumcision advocacy group was founded by Anthony Losquadro, after he questioned, “What did the doctor do to my body?” When he compared his own penis to those of male Renaissance sculptures in Florence, Italy, Losquadro noticed a significant difference. He decided to fight on behalf of the foreskin, “the most sensitive and important feature of the penis.” 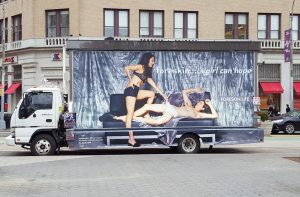 Intaction uses a mobile education unit to educate the public about the powers of foreskin.
Intaction claims to raise awareness by “disruptive protests, demonstrations, & parental education”. They also deploy a mobile education unit which reads: “Foreskin… a girl can hope.” Intaction’s goal is to “raise awareness about the value of intact genitals. Intaction hopes that America reaches a point where male genital cutting rates are as low as European countries,” according to information sent to The Independent.

The anti circumcision advocacy group’s job of educating of the general public includes descriptions of the “Four Powers of Foreskin.”  These benefits are pleasure, protection, lubrication, and connection. This is depicted on their truck as it drives on the streets of New York.

According to Losquadro, Intaction’s greatest accomplishment to date has been the “personal thanks and gratitude of hundreds of men, women, parents, and expecting parents.” He says he finds it extremely satisfying to fight for foreskin, and to supply information that has bettered people’s lives. Despite the history and commonality of circumcision in America, Losquadro told us that he only asks that people keep an open mind. He says, “Don’t assume the status quo in America is something to be defended.”