Important Circumcision Information | You and Your Baby

There is no medical society in the world that sees a significant advantage in the circumcision of small boys.  Even the AAP  does not recommend it. Most medical groups discourage it. Until now the psychological effects of an early circumcision were not discussed. They have not included it into their recommendations. It was not possible until now to exactly know the risks related to genital cutting. The thought that it has a preventative use is mainly based on data that was collected in Africa. These are now strongly doubted. In America there is no medical indication for the need to circumcise. A consent for the surgery from the persons concerned is not possible.

Circumcision refers to the cutting and removal of healthy sexual tissue from either males or females. 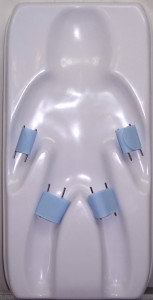 Board used to restrain babies during circumcision

Circumcision is a euphemism for genital cutting.

This is an attempt to conceal the truth. The word circumcision only describes the act of cutting that actually means to cut around. The word ignores the fact that a person’s genitals are actually being cut.

No major medical group recommends either circumcision for all infant males. The World Health Oranization only recommends it for parts of Africa. Ethical and legal questions regarding informed consent  have been raised.

Only about 20% of males worldwide are circumcised.

The procedure is most prevalent in the Muslim world and Israel (where it is near-universal), the United States,parts of Asia and Africa. It is relatively rare in Europe, Latin America, parts of Southern Africa, Asia and Australia.

At birth, boys have skin that covers the end of the penis, called the foreskin. Circumcision surgically removes the foreskin, exposing the glans of the penis. Circumcision is usually performed by a doctor in the first few days of life. An infant must be stable and healthy to safely be circumcised.

Parents should wait until a child can choose Circumcision.

For infant circumcision, devices such as clamp, plastic cups and strings, and other clamps are commonly used. These follow the same basic procedure. First, the amount of foreskin to be removed is guessed. The doctor opens the foreskin at the opening to expose the glans underneath. He ensures it is normal before ripping the inner lining of the foreskin from the glans. The practitioner then places the circumcision clamp which sometimes requires a top slit to be cut. The clamp remains until blood flow has stopped. Then the foreskin is cut. For adults circumcision is often performed without clamps. There are non-surgical methods such as the elastic ring device that is available.

Neonatal circumcision is often choosen for reasons such as for religious beliefs.

Outside the parts of Africa with a large amount of HIV/AIDS, the positions of the world’s major medical groups on baby circumcision varies. They range from considering it as having a small net health benefit that outweighs small risks. They also view it as having no benefit with large risks for harm. No major medical group recommends baby circumcision. No major medical group calls for banning it either. The Royal Dutch Medical Association, which has the strongest opposition to baby circumcision, does not call for the practice to be made illegal. They have a concern that parents who insist on the procedure would turn to poorly trained people instead of medical professionals. This argument to keep the procedure within the scope of medical professionals is found across all major medical organizations. In addition, the groups advise medical doctors to yield to some degree to parents’ choice, in the decision to circumcise. The parents may have views in cultural or religion.

Many Reasons Parents May Choose Not to Circumcise

The reasons why parents may choose NOT to have their son circumcised;