What if we proposed a law requiring circumcision for all newborns?

That’s right. We would endorse federal legislation requiring all newborn males be circumcised.

I bet your saying “hold on a minute – why would someone who is supposed to be against circumcision support such an idea.” Did Anthony Losquadro lose his mind inhaling diesel fumes from the Mobile Education Unit?

Well not yet, but read on for another shocking statement…….

Guess who would be opposed to such a law? Pro-circumcision advocates.

No I assure you, the Earth is still spinning on its axis in the proper orientation, and with some discussion I can help you understand this paradox.

The answer lies in the way medicalized infant circumcision was originally framed, and how it gained its foothold.

It’s all about parental choice.

You see my fellow advocate, if the government mandated infant circumcision, the decision to circumcise would be transferred from the parental domain to the government.

Now when babies grow up into men and find out about circumcision, who would they blame? Since it’s a government mandate, parents could no longer be the scapegoat. Instead the government would take the blame. The government is not willing to incur the wrath of millions of angry young men. It could possibly cause great societal upheaval. It would be the end of circumcision. Perhaps it would even topple the government.

The beauty of the cutters strategy is that parents make the perfect scapegoat. They know it is much more difficult to blame your parents. Few men are going to discuss the issue with their parents. And how can you blame your parents for making a mistaken, misguided decision? You can be angry with them, but for how long and to what extent? They are they very people that created you, raised you, and loved you? The cutters are keenly aware of this and have enshrined parental decision making into their strategy.

That is the reason such a law would never happen. To pass a law mandating circumcision would be the end of circumcision. Parental choice and the notion of “the rights of the parent” would end. The pro-circumcision advocates know that. That’s why their propaganda always concludes with, “Ultimately it’s a parent’s choice.”

In order to keep parents handing over their babies to be circumcised, the cutters just have to keep spinning their lies and printing their propaganda. Then they leave it up to parents to do the rest. Feed them the misinformation and watch them bite the hook. That’s their strategy.

But that’s why our advocacy is going to change the paradigm. We are changing the cycle from parents deciding to circumcise to parents choosing to keep sons intact.

We do this by first educating men about the issues and getting them involved. We show them that they can speak out about their feelings of victimization. Secondly, we make parents aware of that they were taken advantage of during an overwhelming moment in their life. That their trust was misplaced.

Then, we show parents they can constructively overcome regret by empowering them to become advocates for intact babies. 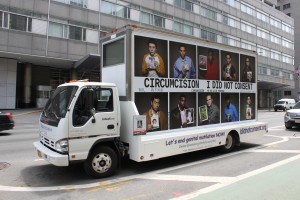 This effort is being made possible with our Mobile Education Unit.

It’s sons telling their parents about the issue. It’s parents overcoming regret. It’s a message that can’t be misinterpreted. All of this is contained in “I DID NOT CONSENT.” It’s a rolling demonstration on steroids – right down Mainstreet USA.

We watch the public react in realtime with a range of responses: affirmation, incredulity, picture snapping, thumbs up, wonder, shock, amusement, finger pointing, and awe on every block. 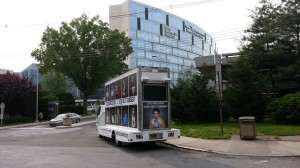 KEEP IN MIND YOUR DONATION IS FULLY TAX DEDUCTIBLE. THAT MEANS THE U.S. GOVERNMENT COULD BE PAYING AS MUCH AS $.50 ON EVERY DOLLAR YOU DONATE TO INTACTION (depending on your tax situation – check with your tax preparer.) WHY GIVE THE GOVERNMENT YOUR HARD EARNED MONEY TO PAY FOR PEPFAR AFRICAN CIRCUMCISION PROGRAMS WHEN IT CAN BE USED TO FIGHT FOR GENITAL INTEGRITY IN THE USA! 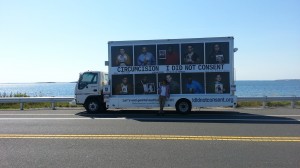 Donors who contribute $500 or more will have their name placed on the vehicle in an area dedicated to LEADERS OF HUMAN RIGHTS.